With the World Cup in full swing, FIFA, the tournament’s governing body, has been working overtime. They aren’t just policing the players on the field, but also the numerous companies, brands, and stakeholders investing in the games.

On top of that, they are keeping a wary eye out for the inevitable ambush marketing stunts that try to ride the coattails of an internationally celebrated event.

It costs a pretty penny to earn the right to associate yourself with coveted sporting events like the World Cup, Super Bowl, or Olympics. At the 2014 World Cup in Brazil, FIFA netted $1.4 billion from 22 corporate sponsors. The six top brands, the official FIFA partners (which included Visa, Adidas, and Coca-Cola that year), contributed over half that amount.

After an expenditure of that magnitude, a company like Coke would be justifiably annoyed if they saw Pepsi ads diluting their exposure near the stadium on game day. FIFA dislikes those practices because it decreases the value of their sponsorship offerings. Who would pay millions to be an official partner if they can get many of the benefits of doing so for free?

Much to the displeasure of event planners, however, cagey brands do indeed often try to slip past the velvet rope and get their name near the big show. The tactic has been dubbed ambush marketing and was first made famous by a marketing strategist named Jerry Welsh at American Express in the 1980s. 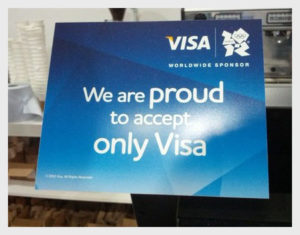 In the lead up to the 1988 Winter Olympics in Calgary, Amex initiated a marketing campaign in Asia based around an organization of their own making called the “Olympic Heritage Committee.” Unfortunately for American Express, Visa was then (and still is) a regular and major Olympic sponsor, and they didn’t take kindly to a competing financial services product stealing their thunder.

Visa lodged a complaint, and the International Olympic Committee (the real authority responsible for the Olympics) moved swiftly to rebuke American Express and demand they shelve the misleading campaign.

Not willing to leave well enough alone, Visa then retaliated with a campaign that promoted its exclusivity at certain venues, notably the Olympics. In a direct shot at its rival, they produced ads letting everyone know that “The Olympics don’t take American Express.”

Since then organizations like FIFA and the IOC have become much stricter about protecting sponsors from ambushes, but many a brand still looks for a clever, indirect way to associate themselves with an event they couldn’t secure an official connection with.

All Is Fair in Love and Brand War

Legally, it’s something of a grey area. Direct or predatory ambushes are punished harshly as deliberate attempts to deceive consumers, sometimes through fraudulent claims or unauthorized usage of event trademarks.

Indirect ambushes are more difficult to contest. The phrases “Super Bowl” and “NFL Championship” are trademarked and protected by the NFL, but they can’t lay claim to generic words and imagery. That’s why brands that aren’t official sponsors frequently rely on euphemisms like the “Big Game” instead of referring directly to the Super Bowl and use pictures of nondescript footballs and trophies rather than showing the iconic Lombardi Trophy.

In addition to guarding language and images, event planners have also taken to enforcing “clean zones” in and around their venues, in which only sponsors may advertise.

The catalyst for that development may have been when Nike ran somewhat afoul of the IOC at the 1996 Summer Games in Atlanta for running a saturation marketing campaign in the host city. The campaign included massive, building-sized billboards and an extremely conspicuous pop-up shop adjacent to the athlete’s village, greatly displeasing Reebok, that year’s official footwear sponsor.

Further blurring the line, Nike also outfitted sprint star Michael Johnson with a pair of golden racing spikes. Without ever saying the word “gold,” team Swoosh managed to indelibly identify itself with the top of the podium. Reebok and the International Olympic Committee voiced their irritation at that move as well, but the damage was already done.

With the rise of the internet age and social media, ambush restrictions have been extended to online activities as well. As early as 2006, for the Turin Games, organizing committees began stipulating that protections for “Olympic-related terms,” like “Olympians,” “Medal,” and “Gold,” applied to keyword advertisers.

Despite all these measures, many brands stay on the lookout for an opportunity to associate themselves with the year’s biggest events, and they are often rewarded for their efforts. A study by Global Language Monitor after the 2012 London Games found that several non-sponsors, including Philips and Subway, were among the brands most associated with that year’s Olympics.

The clear takeaway is that ambush marketing is a decidedly risky move that can net big rewards if executed with nuance and ingenuity. Brand managers and strategists are inherently creative people, so you can expect the cat and mouse game to continue. Event planners will put up new defenses for their sponsors, but the craftiest brands will find clever ways to circumvent them without actually breaking any rules.