Bluetooth Beacons Have Amazing Potential, Why Haven’t They Caught On?

Marketers have a world of technology at their fingertips today. Virtual and augmented reality, programmatic ad buying platforms, inbound automation… the list goes on. But, there is one exciting technology that has been flying under the radar: Bluetooth beacons, tiny physical transmitters that broadcast data to nearby smart devices.

However, their days as a novelty or rarity may be numbered. Business Insider Intelligence estimates that by 2018 there will be over 4.5 million active beacons in the U.S. alone, with nearly 80% of them in retail locations. Rite Aid announced in the beginning of 2016 that every one of its 4,500 U.S. drug stores would have beacons installed, the largest rollout by any major brand.

A recent study by Grand View Research indicates that the market for beacons is growing rapidly and may be worth nearly $60 billion by 2025. Airports in particular are buying in, hoping the tiny devices will help travelers better navigate their labyrinthine facilities (and maybe make a few purchases while they’re passing through). Proxbook, a proximity marketing directory found that “84 percent of global airports are undertaking either a commercial deployment or a trial project related to proximity sensors.”

“With an ‘always connected’ customer base of travelers, proximity technology presents a massive opportunity for transportation providers and their partners to communicate with passengers in real time,” said Thomas Walle, co-founder and CEO of Unacast, a Norwegian startup that aggregates beacon and sensor data. 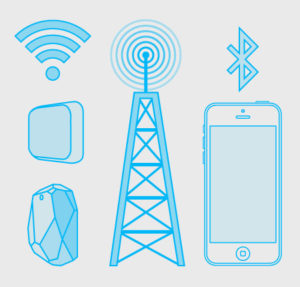 The BLE standard has a similar range as other variants of Bluetooth, about 300 feet, but uses far less power. One-way BLE beacons (transmission only) can run for months or even years on a small battery.

Apple is pushing its iBeacon standard for smart products, while Google’s Android has a number of options, the most popular being the open-source Eddystone platform.

Older smartphones may lack the ability to connect to BLE beacons, but virtually all newer products can. Around the world, there are an estimated 570 million Android and Apple smartphones with BLE capabilities.

Two-way beacons that permit users to send back data are more power-hungry and may require hardwiring or regular battery replacement. Wal-Mart avoided the battery issue entirely by partnering with GE to outfit its stores with LED lighting with beacons built in.

The question remains: given all this development and the usefulness of these devices, why haven’t they taken off?

One of the major issues facing beacons is that many smartphone users leave their bluetooth radios off for security reasons or to save battery life. Typically, old-fashioned, printed signage with a call-to-action asking users to turn on their bluetooth is employed to get around this problem.

But, things are changing. As more cars include bluetooth functionality, users are increasingly dropping the cord and leaving bluetooth on. Additionally, Apple’s decision to remove the 3.5mm headphone jack from the iPhone 7 and promote wireless, bluetooth headphones instead will only further drive bluetooth adoption.

Standalone beacons are also fairly inexpensive, usually costing between $5-30, and prices continue to drop. Some companies are also offering them free of charge, such as Facebook, which provides free BLE beacons to business with a Facebook page.

Who is Using Beacons?

What Can They Do?

The Business of Beacons

Already, the devices are proving more than another fancy gizmo to wow people with, but a serious tool for improving ROI. Levi’s Stadium deployed 2,000 beacons for Super Bowl 50 and smashed its record for food and beverage orders by 67 percent.The beacons let fans order concessions and have them delivered right to their seat and also provided directions around the stadium. 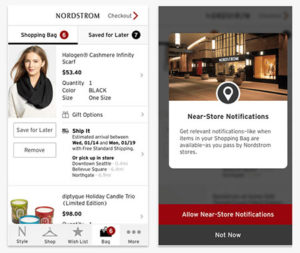 Department store Nordstrom is using beacons to close the gap between online and offline shopping experiences. The company’s beacons send notifications to shoppers if any item in their digital shopping bag is in stock in the physical store they are in.

Patrick Leddy, CEO of mobile marketing platform Pulsate, told “CIO” magazine that beacons are great tools for reinforcing customer loyalty because they reward “…not only transactions but physical presence in the store and getting click-and-collect orders ready as soon as customers walk in, and then letting them know.”

Statista valued the in-store influence of beacons on retail sales at $4.1 billion in 2015. Shockingly, they suggest that beacons will get credit for generating ten times that amount in 2016.

There’s just too much going for Bluetooth beacons right now for them not to see some traction in the coming months and years. Expect to see more of them, and start considering if they can add value to your operations.