Consumers and Advertisers Want More Transparency. Is Blockchain the Answer?

Cryptocurrencies first emerged in 2009 with the release of Bitcoin. Since then, literally thousands of other digital currencies have hit the open market, and an entire financial ecosystem has sprung up around them.

At first Bitcoin was mostly used as a lark. In fact, there is a tongue-in-cheek ‘holiday’ among cryptocoin fans called “Pizza Day” commemorating May 22nd, 2010. On that day a programmer paid 10,000 Bitcoins for two large Papa John’s pizzas. The coins were worth roughly $30 at the time, but would sell for over $80 million at current prices.

Blockchain may have started as a decentralized technology designed to power a digital currency, but it’s grown to be so much more than that. It’s an open ledger for verifying all sorts of transactions. Everyone has access to the record and can see what exchanges are taking place.

Since then, many major retailers have begun permitting purchases in Bitcoin or other cryptocurrencies, although some like Microsoft have since rescinded that feature due to the wild swings in coin prices. Currently, Bitcoin is accepted at sites like Expedia and Overstock.com and can be used for things like paying your TV bill to the Dish satellite network.

The jury is still out on whether digital coins will truly revolutionize international finance — like their unabashedly evangelical proponents claim. What is clear, however, is that whether or not Bitcoin, Litecoin, or Ethereum are still trending years from now, the technology underpinning them, called blockchain, almost certainly will be a game changer.

Blockchain is, in many ways, far more revolutionary than a mere digital currency. It is a software-based, decentralized, open ledger that is secured by cryptography. In less jargony language, it is a record of transactions that anyone can view, but which is virtually impossible to falsify.

The technology behind blockchain is quite incredible and deserving of in depth discussion, but in the context of marketing, what’s most relevant is the fact that it’s secure by design. That means that not only is it good for keeping financial tallies accurate, but it can also be used for all manner of records management purposes such as identity management, voting systems, and documenting provenance.

Don’t be surprised if you start seeing information about blockchain verified supply chains start to appear on clothing tags and cereal boxes in coming years.

The buzz around digital currencies has seen peaks and valleys (which often mirror their equally tumultuous valuations), but blockchain is still growing in awareness and finding new applications daily. Right now we are at a place where a significant number of people have heard the term, but don’t know quite what it is, other than a hot new technology.

The fervor is still growing. Simply adding the term “blockchain” to a company can invite a stampede of investors, clamoring to get in on the action. A small beverage company based in New York saw its stock price soar 200-percent in late 2017 when it announced it was “pivoting” to the technology and renaming itself from Long Island Iced Tea Corp. to Long Blockchain Corp. 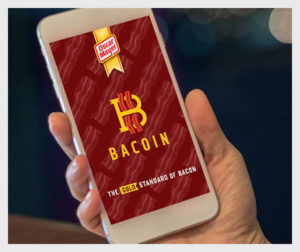 No shortage of other companies have experimented with crypto, though often just for novelty purposes. Oscar Mayer ran a recent promotion that touted a cryptocurrency backed not by a sophisticated decentralized ledger, but actual bacon. Little did they realize, however, that “Bacoin” had already been cooked up by software engineer Kirk Steele (who proceeded to send the purveyor of cold cuts a cease and desist letter).

The two parties fortunately were able to come to a mutually agreeable arrangement. Oscar Mayer could keep using the term, and Steele got a donation made in his name, a supply of free bacon, and the Weinermobile sent to his house to entertain his kids

Stock market ploys and punning promotions aside, there is a very real case for marketers to consider using blockchain technology which ties directly into the data revolution happening today. Companies are collecting more data than ever before, but not all information is of equal value.

Big data is judged on the Four Vs: Volume, Velocity, Variety, and Veracity. Volume and velocity obviously refer to how much data you’re getting and how quickly it can be replenished. Variety describes the types of data, such as whether it is structured or not, tagged or untagged, and the form it arrives in (e.g. text, images, video).

Veracity, the last V, may be the most important of all because a giant, constantly growing, and diverse source of data is worth precisely nothing if it’s fraudulent or erroneous. Transparency, authenticity, and accountability are bywords of this era for good reason. The internet and other computerized technologies have laid bare our secrets. When all the world’s information is only a click away, nothing stays buried for long.

This new reality is being felt, not just by consumers, but by brands as well, which are increasingly demanding proof that their marketing investments are being directed as described by their contractual frameworks.

Computers may have made it easier to track how advertisements spread, who is looking at them, and for how long, but they have also made it possible to falsify that information. Analytics engines aren’t smart enough yet to figure out if an ad was served to a real person or a bot posing as one.

It’s a major pain point in the industry with 79-percent of advertisers said in a recent survey that they had serious concerns about transparency as to their programmatic purchases. Blockchain is being seen as a path to alleviating those fears by validating ad views, and proving that there were real humans on the other end of each transaction.

Authenticity and transparency are two of the most coveted brand associations today. In a digitally-connected world, brands and individuals alike are smart to live their lives out in the open, for all the world to see.

Verified ad delivery is just one application for blockchain tech, however. It can also be used to promote higher levels of engagement thanks to more accurate reporting of ad frequency.

Studies show that four to six exposures is optimal for influencing consumer behavior. Less than that and people fail to take notice, more and they either start tuning out the message, or, worse, become genuinely irritated. Blockchain has the potential to keep a near perfect record of exposures to real people, preventing ads from being over or under served.

On the consumer side of things, blockchain is also shaping up as a valuable marketing tool for proving a brand’s claims are legitimate. Today it’s not uncommon to see all manner of certifications, badges, and claims festooning product packaging such as “Fair Trade,” “Sustainable,” “Organic,” or “Cruelty-free.”

Millennials in particular are demanding those features and values are reflected in the products they purchase. They want their dollars to go towards companies that act transparently and ethically. Claiming to be transparent is a good start, but actually doing it is much better, and best of all, is providing the hard evidence.

Don’t be surprised if you start seeing information about blockchain verified supply chains start to appear on clothing tags and cereal boxes in coming years.

Blockchain may have started as a decentralized technology designed to power a digital currency, but it’s grown to be so much more than that. It’s an open ledger for verifying all sorts of transactions. Everyone has access to the record and can see what exchanges are taking place.

Names of involved parties may be replaced with pseudonyms, but because the transactions themselves cannot be obfuscated or hidden, it’s the perfect tech to solve the transparency problem affecting consumers and advertisers.

Authenticity and transparency are two of the most coveted brand associations today. In a digitally-connected world, brands and individuals alike are smart to live their lives out in the open, for all the world to see. It’s been said that sunlight is the best disinfectant. Blockchain might just be the digital tool we’ve been waiting for to open the blinds and let the light in.