Design at the Global Scale: Place Branding and the Olympics

At the most basic level, a brand is a differentiator, a mark of distinguishability, but its larger role is to distill an abstract concept down to a single, tangible identifying mark. Sometimes the underlying concept is rather straightforward, like a household product, but other times it is harder to pin down, like an entire city: “Most great cities have a brand that’s developed organically — Paris around romance, or Hong Kong around trade. For many cities, it’s impossible to sum up the brand in a word — they’re multi-dimensional and also changing.”

When branding a product or service or even an individual, the stakeholders are usually few in number and fairly easy to identify. Uniformity reinforces branding, so getting everyone on the same page is crucial. But a city has numerous neighborhoods, communities, and institutions, each with its own ideas about its hometown’s brand. “With myriad organizations possibly communicating about their city in a random and unfocused manner, there is an increasing need to protect and actively manage [a] city’s identity and reputation.”

The Olympics is a behemoth of a global brand, valued in 2012 at nearly $50 billion, and second only to the World Cup among sporting events. Should a city be lucky enough to be selected to host the Olympics, marketers have the added challenge of representing both the character of the host and the spirit of the games itself. Brazilian design firm Tátil was tasked with just that for the upcoming 2016 Summer Olympics in Rio de Janeiro. According to team leader Fred Gelli: “We were asked to transmit Olympic values and attributes, to reflect the local culture, to project the city and country’s image, to assure universal understanding as well as be current until the actual Games.”

That’s an incredible amount of information to pack into one logo. To achieve this goal, Gelli sought opinions from virtually everyone at his agency. He stressed the importance of building a mark that was as pluralistic as possible: “The idea was to root the identity in the essence of Rio’s Cariocas — its citizens. “We were born from a mixture of ethnicities. We warmly embrace all ethnicities, faiths and generations.” But, even more than just a Rio event or a Brazilian event, the Olympics is a time for international togetherness: “The logo was not designed for designers, but for everybody in the world,” says Gelli. 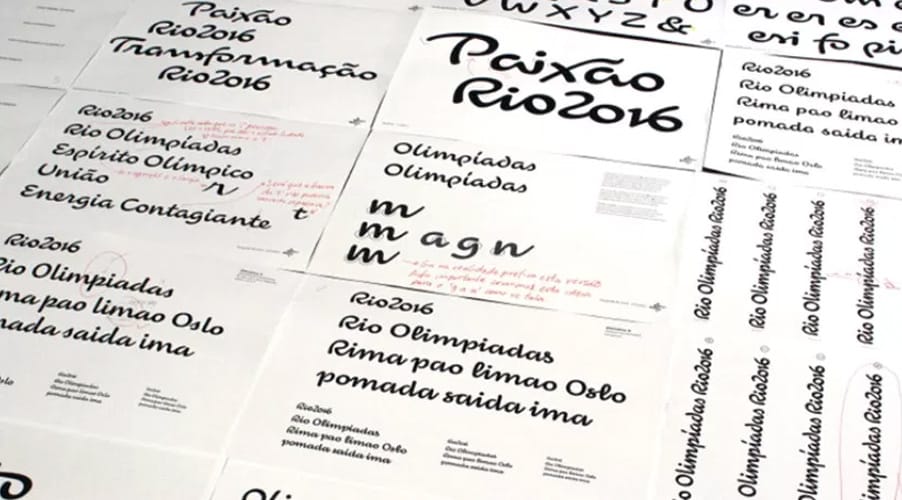 The final product “draws on the shape of Rio’s mountains and landmarks — colors reflect the region’s forests, the ocean and the ‘warmth’ of Rio and its residents.” Additionally, Tátil’s design was built to work as both a two-dimensional logo and a three-dimensional object that will be incorporated into a range of goods, such as jewelry and artwork, as well as sculptures that will be installed around the city. Gelli has said, “The brand is made to be experienced.”

Tátil also created a logotype, which font foundry Dalton Maag used as a guide to produce an accompanying font called “Rio 2016.” “Our prompt was that the font had to be an exact replica of the letters in the logo” (a complex task, as typically the font is created before the logotype).

The response to the branding effort has been somewhat mixed, with local Brazilians mostly pleased with the result, but with some in the wider design community calling it tediously inoffensive. But perhaps the backlash to London’s brash and jagged logo for the 2012 Olympics and the plagiarism scandal that resulted in Tokyo withdrawing its logo for the 2020 Games led Tátil to opt for a conservative approach.

Several candidate cities are following a similar approach. Los Angeles hopes to host its third Summer Games in 2024. An initial design by M&C Saatchi LA and Sydney-based RE went for striking and sharp but was ultimately scrapped when LA briefly lost out to Boston in the United States Olympic Committee bidding process. Boston dropped its bid last summer, and now LA is back in the picture, this time choosing something more conventional for its logo.

Safe may be in favor right now, but there was a time when brash and exciting worked. Among graphic designers, Lance Wyman’s bold, concentric designs for the 1968 Summer Games in Mexico is considered a standout: “The resulting design program, a multidimensional integration of logos, typography and color, developed to communicate to a multilingual audience, was cited by Philip Meggs in the book ‘A History of Graphic Design’ as ‘…one of the most successful in the evolution of visual identification.’”

Hosting the Olympics is a signal that a city and a nation are players on the world stage. The Olympic brand is powerful, communicating internationalism, competition, and achievement. When place branding succeeds, the local population is energized and visitors are drawn in. Combine the two, and you get a strong identity that unifies a populace with a shared vision of a revered past, a vibrant present, and optimism about the path ahead. It is a promise of value that can translate to real economic growth.

That’s a lot of pressure on designers to deliver, but when everything comes together, the outcome can fuse the best parts of place branding with the celebrated Olympic identity, creating something truly meaningful and lasting.