Second screens, the devices that draw attention away from primary viewing sources, have long been feared as harbingers of television’s demise. But, far from TV’s enemy, smartphones, tablets, laptops, and the like may actually be our best hope of maintaining the relevance of televised broadcasts. The second screen may be pulling away our attention somewhat, but truthfully, the days of the family sitting together passively in front of the tube are long gone.

A 2015 Deloitte study found that 90% of Americans multitask while watching TV. We’re folding laundry, checking our fantasy team stats, playing with fido, posting to our social networks, and whipping up dinner… and all the while the TV is humming along peacefully in the background.

Millennials in particular are prone to consuming content on multiple devices at once. Three quarters of them say they browse the internet while watching TV. As they say, if you can’t beat ‘em, join ‘em, and that’s exactly what the best marketers are doing with the second screen. 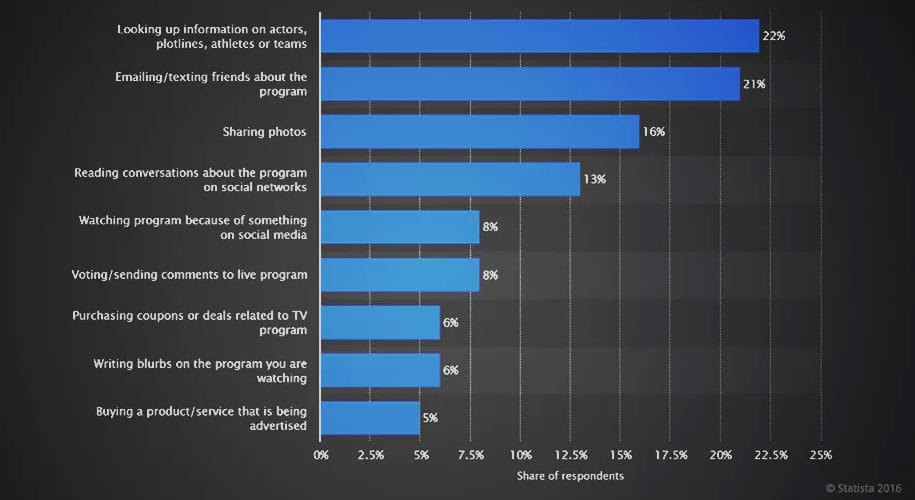 Today’s mobile devices aren’t a substitute for television, they are a value add that helps create an enhanced viewing experience.

Broadcasts can be augmented with interactive features like social dialogues about the programming. Second screen applications can be synced to live TV to allow for polling, chatting, and access to extra info about the show or even unseen camera angles.

HERE ARE THE MOST COMMON SECOND SCREEN ACTIVITIES ACCORDING TO NIELSEN:

Best of all, these apps provide valuable information about the audience to broadcasters and advertisers, helping bridge the gap between traditional and new media.

The second screen has uses outside of TV as well. Conferences are starting to offer custom apps that sync with event content to keep audiences engaged.

Video games also are providing apps that give players using a second screen an edge in the form of maps and strategic info.

Stadiums and arenas are also hoping to give the fans the best of both world with apps that provide the commentary, slow motion replays, and augmented reality visual aids (like the virtual red first down line in football) they get at home.

It all adds up to increased engagement and fan loyalty, better metrics for the bean counters, and new ad platforms so that messaging can transcend formats.

For marketers, what was once a danger is now an opportunity. Daniel Slotwiner, Director of Advertising Research at Facebook, is fully onboard: “Our research saw that marketers can optimize their brand impact by coordinating and adapting their campaign assets across screen.”

Here are several brands that are leading the charge:

SyFy Sync is an app that serves up behind-the-scenes videos, trivia quizzes, fun facts, and other content linked in real time to what’s being broadcast on the cable channel.

This past October, Snap, Inc. worked with the FOX network for activations during the live broadcast of “The Rocky Horror Picture Show.” Audiences watching the show and using the app got access to exclusive Snapchat filters.

Clorox teamed up with ABC’s reality show “The Bachelorette” for a second year to produce second screen content through an app called Viggle where audiences can play a game related to the show called “Clorox Matchmaker.” 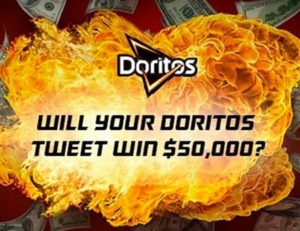 Doritos launched a major initiative at 2016’s Super Bowl 50 called “Crash the Second Screen.” The best text, video, and photo tweets during the game had a chance to win $50,000.

We are living in an always-on culture. The connection is permanent and the sources of content are only growing.

Don’t think of the second screen as taking away your audience. View it as a way to connect on an even deeper level. Each screen has its advantages and can be used to tell a piece of a larger story.