Here we go again, the biggest day in advertising is upon us. The Super Bowl isn’t just the culmination of the NFL season, it’s the day when brands trot out their best work for the biggest audience.

And, unlike almost every other major sporting event, it draws not only a massive crowd but an unusually inclusive one as well.

In fact, of the top 20 biggest domestic broadcasts ever, 19 have been Super Bowls. In a media ecosystem where live broadcasts are less and less common, every Super Bowl this decade has pulled in over 100 million live viewers. That’s a third of the country. They can’t all be your typical football fan. Instead you have something with much broader appeal– a spectacle, a tradition, a watercooler event that’s fun to be a part of. 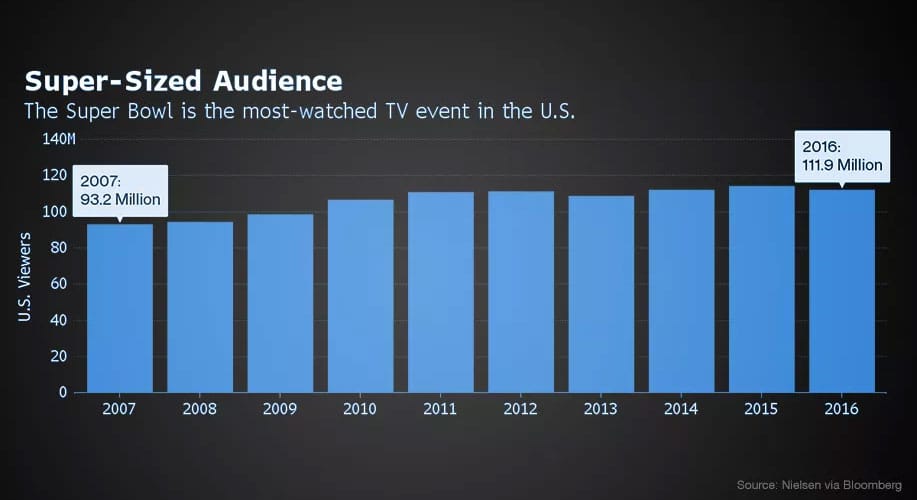 Unlike so much of the content we consume today, sports are still one of the last bastions of truly live entertainment. You can’t binge watch the Super Bowl like a Netflix series, and there isn’t much sense in DVRing it. Half the fun is being part of the conversation and no one wants to be left out.

The prospect of a huge, engaged crowd that not only isn’t skipping the commercials but may actually be tuning in to see them is what makes Super Bowl advertising so desirable and expensive.

In 2010, 30-second ads were selling for $2.5 million. Fox is charging double that for this years broadcast.

Commercials with celebrity endorsers and high production values can cost over a million dollars to produce, and several million more is usually spent supporting the campaign with PR, sales programs, and media buys on social networks like Facebook and video platforms like YouTube.

At the end of the day, companies going all in on Super Bowl Sunday can end up spending over $10 million.

It’s certainly not for penny pinchers, but brands that take full advantage of the Super Bowl’s insane reach can reap benefits that can’t be found elsewhere.

Established brands can be reinvigorated and newcomers can set themselves apart as someone to watch.

In fact, the Super Bowl is increasingly being seen as something of a coming out party for brands hoping to elevate their status. According to Kantar Media, 23% of the advertisers in last year’s game were first-timers.

In addition to the people watching on the big screen, millions more will be taking advantage of the web simulcast. Fox will be offering a free high def live stream with digital ad insertion customized for 170 Fox affiliates.

The game is an exposure bonanza, and thanks to social media and online video the event travels even further than just the airwaves.

That 30-second ad during a three-hour game essentially has been extended to a three- to four-week opportunity to engage with the consumer.”

The Stars Come Out

Something else that has returned from last year is a heavy dose of star power, as several brands tap big names (and the social networks those names bring with them).

Some brands are keeping their big ideas under wraps until game time. Snickers can’t reveal its ad because, in a move that doubles down on the live nature of the Super Bowl broadcast, it’s going to film it during the game.

The candy bar company did, however, join in the recent trend of uploading a ‘teaser.’

So did Kia; the carmaker enlisted “Ghostbusters” actor Melissa McCarthy for a third-quarter spot, but only released a mysterious clip of her in safari gear running from some unknown danger.

Others are releasing their whole spot, hoping to get a headstart on YouTube view counts. Skittles uploaded their “Romance” ad over a week before the game and broke 3 million views within days.

Procter & Gamble is advertising its Mr. Clean household products for the first time at the game, but also leaked the ad online early. The cheeky commercial featuring a flirtatious take on the brand’s mascot quickly generated 1.5 million views.

Lexus also passed the million view mark before the teams even suited up with a slick, 60-second spot featuring the gyrations of street dancer Lil Buck and its new LC luxury sports coupe.

We’re definitely in a transitionary period in media today. Viewing habits are in flux and marketers are forced to stay on their toes and adapt. Live audiences are vanishingly rare.

But, it’s nice to know that even with a world of digital content at our fingertips, hyper targeting, and microniches, there are still some events that we all want to experience together in real time.

Crawford succinctly described the appeal of the big game as: “…one of those few events that we still all sit down with kids and grandmas and friends, guys, girls — we’re all watching together.”