Who can forget the good old days of the 1990s? Tech stocks ruled Wall Street, Full House was a hit on the small screen, the Clintons were making headlines, and Pepsi had a strange clear cola in the works. Wait… what year is it again?

Every generation likes to harken back to days past. It’s always fun imagining what it would be like to grow up in our parents’ era. For example, audiences in the ’70s indulged in their fascination with the ’50s with films like Grease and shows like Happy Days. In the ’80s, The Wonder Years revisited the ’60s; in turn, the ’90s gave us That ’70s Show.

Today, the nostalgia cycle is still going strong. Thus far, 2016 seems determined to blow out the past few years worth of ’80s retro in style — the pop-culture talk of the early summer was the big-budget Ghostbusters remake and the Spielberg-esque spookiness of Netflix’s Stranger Things — even as we roar straight into the ’90s revival.

Brands are getting in on the action too, offering products and promotions that trade on fond memories. There’s good reason: Nostalgia can be a potent engine for marketing. Not only does it elicit positive emotions, but studies have shown thinking about the past can loosen consumers’ purse strings.

A study at the Grenoble École de Management in France found that nostalgia increases feelings of social connectedness, and decreases financial concerns. The authors wrote: “We found that when people have higher levels of social connectedness and feel that their wants and needs can be achieved through the help of others, their ability to prioritize and keep control over their money becomes less pressing.”

It’s no wonder, really. Thinking about the present and future can cause tension as we are forced to contemplate the deadlines, bills, and obligations facing us. A moment of wistful reverie can be just the thing to remind us of life’s bigger picture and ease those pressures.

The beverage sector, in particular, is going after nostalgic consumers in a big way. In 2014, Coca-Cola brought back Surge, its short-lived ’90s Mountain Dew competitor, after 128,000 members flooded a Facebook fan page with love for the green soda. Demand has held strong, and the product is still available on Amazon.com.

Coke also revived another green blast from the past, Hi-C Ecto Cooler, a juice first released in 1987 to promote the original Ghostbusters film. The relaunched drink hit stores on May 30, as pre-release hype for the new movie was at its peak. 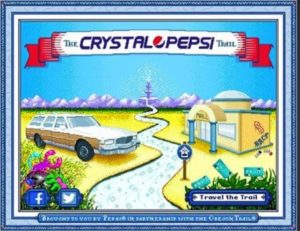 Pepsi has its own slate of retro products as well. It introduced a line of “throwback” sodas in 2009 that featured vintage labeling and touted the inclusion of real sugar instead of artificial sweeteners just like their original drinks. Last year, the big moment came: The company ran a sweepstakes offering a limited run of Crystal Pepsi. The clear soda had been a major disaster for the company in the ’90s, but the nostalgia promotion was an instant success: 13,000 six-packs were given away in just one day.

Pepsi was so pleased with the buzz generated on social media that the beverage maker is going for an even larger promotion this summer. Crystal Pepsi hit supermarkets this week for a two-month-long wide release. The campaign includes the release of a ’90s-themed online game called the “Crystal Pepsi Trail,” which parodies the classic computer game The Oregon Trail and features references to generational children’s favorites like Nickelodeon’s Double Dare and Tamagotchi.

“Pepsi is all about pop culture,” the firm’s director of marketing, Linda Lagos, told AdAge, “and few things are as hot right now in pop culture as the 1990s.”
#GenerationThrowback

The millennial generation who grew up in the ’80s and ’90s are just now becoming a consumer force to be reckoned with. Retail Leader estimates they are “expected to spend more than $200 billion annually starting in 2017 and $10 trillion in their lifetimes.”

Companies want to foster a relationship early with young consumers, hoping to develop brand loyalty that sticks with them. Science Daily cites a study finding that children’s brand preferences “carry over into their adult lives and are often difficult to change.” 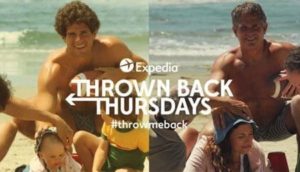 Interestingly, while millennials are especially attuned to nostalgic campaigns that link to their childhoods, they also seem predisposed to enjoy concepts from further back in time. That’s because the Internet has opened up casual access to the pop culture of bygone eras: The wealth of information out there on the web has exposed them to decades of content that previous generations likely never would have seen. Once upon a time, when a commercial finished airing its original TV run, that was it. Today, that ad lives forever on YouTube.

As Marlene Morris Towns, professor at Georgetown University’s McDonough School of Business, told Digiday: “This generation is far more in touch with previous generations’ styles and tastes and there’s elements of a greater sense of discovery.”

The tumult of the times may also be driving young adults to “early-onset nostalgia.” According to marketing analyst Cassandra Mcintosh: “Millennials are coming of age in an age of economic turmoil — a difficult job market. Therefore, they end up romanticizing simpler times much more — even those times they weren’t around for.”

The takeaway is clear: Nostalgia is powerful right now. Brands would do well to start digging through the company archives for something from their own cherished history. Older audiences will enjoy the stroll down memory lane — and the younger market is likely to get a kick out of it, too.