It’s National Radio Day This Week, and It’s Impressive How Many People Are Listening

Before he was chasing down scofflaws on prime time, rapper LL Cool J shot to fame with a hit song called “I Can’t Live Without My Radio.” It was an anthem for the boombox jockeys of the 80s. And the title is still true. Gargantuan, shoulder-mounted portable stereos may have disappeared from our streets, but the airwaves still hum with sound and energy, and a huge majority of Americans tune in regularly.

Sat., Aug. 20 is National Radio Day. So let’s take a look at the state of the business. Who’s listening where? What do marketers need to know today in order to best target their audiences?

Old-fashioned terrestrial radio may not get as many headlines as newer ways to get your audio fix like streaming services, but its reach remains undeniably impressive. A recent Nielsen study suggests ”93 percent of U.S. adults listen to AM/FM radio weekly” — that’s significantly more than the 70 percent using smartphones weekly, or even the 87 percent watching television. 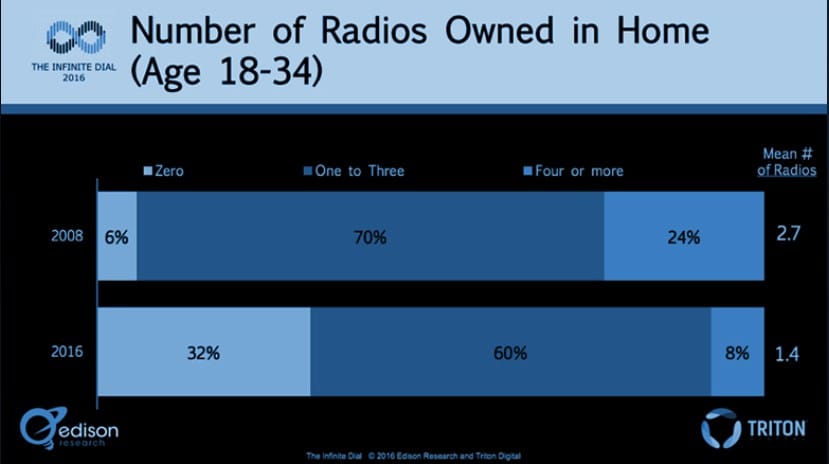 The prevalence of traditional radio is due in large part to the AM/FM tuner’s ubiquity on car dashboards, combined with America’s large numbers of daily commuters-by-car. Retail stores and restaurants, in particular, benefit from targeting commuters, especially on their way home when they have time to do some shopping or dining.
According to Edison Research, 90 percent of commuters listen to AM/FM radio on their way to and from work, ”…easily beating out CDs (62%), owned digital music files (54%) and streaming internet radio (42%) as the most common form of in-car audio during commute time.”

Even webcasts of terrestrial radio are finding an audience, with simulcast streams that extend its reach. iHeartMedia (formerly Clear Channel), the nation’s largest owner of radio stations, has 80 million users of its free smartphone app, iHeartRadio.

240 million Americans turn on their radios every week, and those kind of numbers are hard to ignore or downplay. Daniel Glass, founder of indie label Glassnote Records, told Billboard: “It’s the No. 1 source of exposure for our artists. Everything else is cool and nice, but radio really makes a difference with multiple impressions, and radio presented right can really lead to hit records.”

However, the overall picture for terrestrial radio isn’t quite so rosy. Its user base is impressive when viewed as a static figure, but as a trend it indicates change is coming — and fast. In 2008, a mere 4 percent of Americans didn’t own a radio, today that figure is closer to 21 percent. The number is even higher for 18 to 34-year-olds, of which nearly a third don’t have a radio.

Apple and several wireless carriers have exacerbated the problem by failing to activate the FM capabilities in their smartphones. Most LTE chips have FM tuners built in, but only a third of them have been activated in the U.S. ”Carriers have little financial incentive to do so because they profit from streaming data, according to Barry Rooke of the National Campus and Community Radio Association.” Apple, for its part, likely doesn’t want extra competition for Apple Music, its streaming service.

Both iHeartMedia and its closest competitor in the traditional radio market, Cumulus, are struggling under heavy debt burdens and languishing stock prices as investors salivate over hot tech properties instead. The inclusion of wi-fi in more and more new cars is further eroding their market share. Streaming services are becoming as easy to access on the road as an FM signal, and offer considerably more features.

It’s all but certain that streaming’s growth won’t be denied. The total user base for internet radio has doubled in the past 5 years to 180 million people, and 2.68 minutes of ads are played for every hour of online radio. Meanwhile, Fast Company reports that Apple’s once hugely popular iTunes store saw a 13 percent decline in sales last year, while on-demand streaming was up 54 percent to 164 billion streams as consumers increasingly prefer not to own their music.

Spotify alone hit 100 million users as of June of this year. Half its users are based in the U.S. and nearly three-quarters of all its members are using its free, ad-supported version. Most streaming services are still in growth mode and not heavily focused on revenue, but RAIN News reports that the market for ad-supported internet radio (not including terrestrial simulcasts) ”…is projected to nearly triple from $1.6 billion in 2015 to $4.7 billion in 2025.”

BETTER FOR AUDIENCES AND FOR ADVERTISERS

The advantages of streaming radio over traditional terrestrial broadcasting are numerous. Listeners get a broader array of content to choose from and more control over when and how they listen. Spotify and Apple Music are both investing heavily in curation to shine a light on the best content. Spotify, thus far, has taken an algorithmic approach, whereas Apple is betting on the human-based curation system it acquired when it purchased Dr. Dre’s Beats Music.

Listeners who start streaming often find it hard to go back to tuning the dial the old-fashioned way. Edison Research’s study found that 43 percent of people would choose terrestrial radio if they only had one audio option in their cars, but, tellingly, ”…respondents who have ever listened to streaming internet radio during their commute would take that choice (28%) over traditional AM/FM radio (25%).”

Advertisers are warming up to streaming as well because of its incredible potential for hypertargeting and rich metric analysis. Spotify is moving aggressively into marketing automation as well. It has partnered with several programmatic online advertising platforms including AppNexus and Rubicon Project to sell its ad inventory in near-real time.

As Advertising Age reported last month: ”That means an ad buyer can now tweak and serve audio creative to a user based on what they know about the user — listening habits and log-in data from Spotify and first-party data from a client, for example — in a matter of milliseconds.”

Additionally, research shows that while audio-based advertising doesn’t suffer from the ad-skipping problem facing most digital advertising today, users can and do change the channel when ads come on — but do so less with streams than traditional radio.

It seems clear that streaming has its sights set on global domination. And several players are vying for control of the market.

Pandora had an early lead, but is rapidly losing market share to Swedish rival Spotify. In June, Spotify overtook Pandora for the first time ever among the coveted 18-24 Millennial demo.

Google is offering music directly through its Google Play Music service and indirectly via YouTube. Amazon Prime offers members access to 1 million songs, which seems paltry when compared to Spotify’s 30 million tracks, but Prime Music is popular because it’s seen as perk added to their free shipping service.

Apple is considered a contender, both because of its acquisition of Beats, and because the:

“…company has access to 800 million users’ credit-card numbers, and new Macs and iPhones will have Apple Music preinstalled.”

Rap mogul Jay-Z’s streaming startup Tidal has a huge roster of A-list pop stars backing it, and is trying to differentiate itself with exclusive content and higher quality audio options, but has so far only amassed 3 million global subscribers. It might not make it on its own, but rumors have long circulated that Apple is considering purchasing the service.

If all that wasn’t enough, SiriusXM is still showing signs of life with over 30 million subscribers, well-established partnerships with automakers and car dealers, and a robust catalog of music and other types of programming like sports, talk radio, and news.

While wi-fi is more common in cars today, the high cost of data usage may be scaring consumers away from dropping their satellite services. In early 2016, the New York-based company announced its best user growth in eight years.

It’s non-music programming, in particular, is a bright spot for the company and a growing source of revenue: ”Despite marketing themselves as being an ad-free listening experience, SiriusXM does have opportunities for advertising through live reads by A-list talent, segment sponsorship, and some standard :30 and :60 second advertising spots on channels that are non-satellite exclusive channels, such as Fox News, CNN and ESPN channels.”

TUNING IN TO THE OMNI-CHANNEL

Ultimately, only time will tell who will win the day, but right now the best approach for marketers is an omni-channel strategy. Terrestrial radio is the go to choice for brands that sell to broad markets, streaming is best for hitting younger demos and more niche targets, and satellite falls somewhere in between. A truly powerful campaign would integrate all available platforms, taking advantage of the strengths of each, with the goal of transmitting a seamless brand message.

American ears are wide open, and now there are more avenues than ever to reach them. Just like LL Cool J, we still can’t live without our radios… but now we can’t do without our streams either.