Everyone has a voice and many feel the need to share it with others. But, it wasn’t that long ago that only a rare few had the resources to transform their messages into sophisticated multimedia content, and fewer still had the distribution infrastructure to transmit their ideas and announcements to a large audience.

Today, the average teenager carries a smartphone with a video camera more capable than any used by television studios not that long ago. Furthermore, they are constantly connected to social networks that carry their missives and creations to virtually every corner of the globe just about instantly.

It’s a radical departure from the old way of doing things and has ushered in a democratization of content production. The elites like newspaper editors and movie studio chiefs still produce their fair share of the media we consume, but now the audience itself has the tools to contribute, and millions are relishing the opportunity to be a part of the conversation.

A whole new media ecosystem of user generated content (UGC) has sprung up and is being replenished daily by an army of bloggers, vloggers, citizen journalists, curators, product reviewers, and amateur authors, artists, makers, and creators of every stripe.

Despite this new influx of videos to watch and articles to read, the appetite for content appears insatiable. Viral sensations are increasingly short-lived as we’ve all learned not to get too attached to any trend because we know the next one will be along shortly. That fact, combined with a movement away from interruptive, non-permissive marketing, towards inbound approaches that draw audiences in rather than demand their attention, has fed the current content marketing revolution.

Brands also have a voice, and access to the same tools and networks everyone else now does. They are using that power to promote themselves, commission and share media tuned to their customer base, and cultivate ambassadors and loyalists to do likewise.

When you view all these developments together, it becomes clear why brands would want to harness the creative energies of their audiences. Not only are they engaging with their followers and outsourcing some of the cost and effort of content production, but many reports indicate these forms of marketing are especially effective to boot.

Starbucks was an early believer in the usefulness of user generated content and found a lot of success with its 2014 “White Cup Contest,” initiated to promote their reusable cups. Fans were instructed to decorate the blank cups and share their creations online with the hashtag #WhiteCupContest. Winners received $300 Starbucks gift cards in exchange for transferring rights to their work to the coffeemaker.

GoPro has gone a step further, building out an entire platform for users of its action cameras to share and discuss the incredible videos they capture on the devices. As a result, GoPro videos routinely rack up big view counts on Youtube, Facebook, and other social channels.

Apple is also no stranger to the benefits of spreading a brand message with UGC. They launched the “Shot on iPhone” campaign in 2016, which asked iPhone users to submit their best shots. Apple displayed the images on billboards literally all over the world to show off the capabilities of their smartphone. 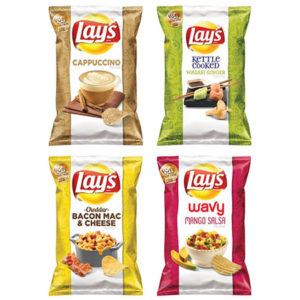 When a UGC campaign hits, brands often bring it back year after year. Lay’s started it’s “Do Us a Flavor” contest back in 2013 to request ideas for new potato chip flavors from their customers. They’ve run the promotion annually since then, and fans of the brand never seem to run out of wild new flavor ideas for their favorite snacks.

A word of caution, however, not all UGC ideas work out quite so well. McDonald’s came to regret asking social media users to post experiences at the burger chain with the hashtag #McDStories. Instead of posting about good times and happy meals, the tag was used to highlight complaints and issues people had with the brand. Worse, the tag is still trending years later! So, clearly, due diligence and consideration of undesirable outcomes is well advised before crafting a UGC promotion.

It’s a truism often repeated that people are more influenced by their own friends and family than even the most convincing brand spokesman. The millennial generation, in particular, has been described as naturally averse to traditional advertising methods and heavily inclined to poll their social networks when looking for buying advice.

That goes a long way in explaining why user generated content has been found to be 20-percent more influential to millennials’ buying habits than other forms of media. Another study found that even among a broader demographic, UGC ads have click-through rates four times greater than traditional ads.

The democratization of content and channels of communication has made us all more transparent than ever before. There is nowhere to hide and brands and individuals alike now live in the public square. In such an environment, authenticity earns premium status.

The UGC revolution is an offshoot of that reality as well. As Peter Cassidy, co-founder of Stackla, a social media aggregator, put it: “The exponential growth of social sharing has presented marketers with an unprecedented opportunity: access to a giant footprint of compelling, visual customer stories which brands can use to make their marketing more genuine, personal and relatable.”