Marketing and advertising live at the cutting-edge of technological development today. Augmented reality, machine learning, big data, and omnichannel analytics represent the calculated, numbers-driven side of the business.

Those fairly recent developments have definitely upgraded our toolkit and opened up new avenues for growth, but, at the end of the day, they all still require a creative spark to set them in motion.

Though the day when machines think for themselves isn’t as far off as it used to be, the world’s most advanced computers are still useless without human brains to direct them. Technical wizardry helps us bring stories to life, but it’s the stories that really move people.

Among the great names in marketing history, few people embody that principle more than Bill Bernbach, the man who, along with fellow legend Helmut Krone, led a revolution in advertising in the 1960s and 70s.

“Advertising is fundamentally persuasion and persuasion happens to be not a science, but an art.”

David Ogilvy, another of the most storied names in advertising, ruled Madison Avenue in the previous decades because he understood the power of data. He was famous for demanding painstaking research into consumer habits, crediting his successes to it.

Yet, Bernbach saw that facts and figures only took you so far. A new, rebellious generation was seeing through marketers and losing faith in their claims. They were tired of exaggerations, hollow materialism, and dated communication styles.

Bernbach convinced his clients to tone down their language and speak to consumers not like mindless machines, but like the thinking, feeling people they were. Through the use of humor, candor, and irony, he disarmed audiences and put brands back on a path to rebuilding relationships with their customers.

“Memorable never emerged from a formula”

Irony, in which something’s appearance belies an absurdly opposite reality, appealed particularly well to the cynicism of the 60s and 70s. People had stopped trusting traditional sources of authority, so communiciations satirizing that state of affairs were seen as credible — or at least in on the joke. 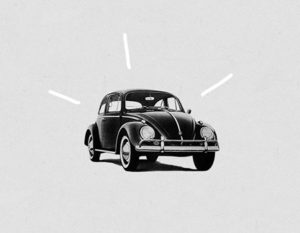 For example, when other carmakers were pushing tail-fined land yachts, Bernbach and Helmut Krone made Volkswagen’s diminutive and underpowered Beetle a media darling thanks to a counterintuitive campaign that poked fun at its shortcomings.

“Lemon,” “Ugly,” and “Think Small,” turned the advertising of the time on its head. The Beetle’s tiny size and relatively feeble power plant weren’t defects, they were what made it special and a smart choice. Similarly, Krone and Bernbach gave car rental company Avis a slogan in “We Try Harder” that made an advantage of the brand’s second place status which lasted for decades.

Both campaigns went against the conventional wisdom of the time. The bean counters at his agency probably cautioned against them, but as Bernbach once said: “Rules are what the artist breaks; the memorable never emerged from a formula.”

The Art of Persuasion

Ultimately, what Bernbach really preaches is respect. If you respect someone you don’t talk down to them, you don’t mislead them, and you don’t exploit their trust in you. He understood that only by respecting customers could brands hope to win back their faith and good favor.

The VW and Avis campaigns showcase Bernbach’s unpretentious and extremely personal creative style. He was certainly well aware that every agency still needs someone keeping track of the bottom line, but he cautioned repeatedly against forgetting the human side of the business.

There are a lot of great technicians in advertising, he once said, and “They can tell you that a sentence should be this short or that long. They can tell you that body copy should be broken up for easier reading. They can give you fact after fact after fact. They are the scientists of advertising. But, there’s one little rub. Advertising is fundamentally persuasion and persuasion happens to be not a science, but an art.”

Advertising undoubtedly requires a good measure of both art and science, but studying Bernbach reconnects us to its subjective, imaginative, soulful aspects. Art without science is unfocused, but science without art is heartless and, as history shows us, unsustainable.

When both instincts are combined, however, that’s where magic happens. That’s where we create ideas that connect to us deep down as human beings and stay with us for the long haul.