The Power of Cause Marketing

Consumers are asking more of their brands. They want them to be better stewards of the Earth and stronger protectors of their people — and the companies that can address those concerns are seeing outsized growth.

Two big stories with implications for branding and corporate governance made the rounds recently and they both speak directly to the growing influence of cause marketing.

Cause marketing is an umbrella term for the use of consumer-facing outreach to simultaneously improve an organization’s bottom line while promoting an important social cause that its target market is concerned with.

Patagonia Founder Gives the Company Away to Protect the Planet

The first major story was that Yvon Chouinard, founder of outdoor clothing brand Patagonia, announced he was relinquishing control of his company and giving away all his shares to two newly formed trusts that have been set up to support Patagonia’s social missions, particularly the protection of natural environments. 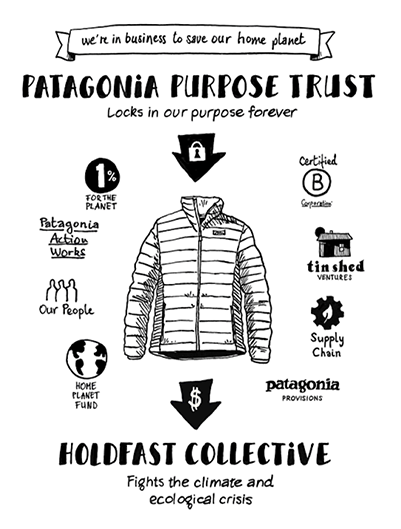 Pundits were quick to wonder whether this change meant the company was no longer interested in making profits or competing aggressively in the marketplace, but Patagonia CEO Ryan Gellert quickly dismissed those suspicions:

“I think what people fail to understand about Patagonia, both the past and today and the future, is that we are unapologetically a for-profit business,” said Gellert. “We are extremely competitive. The Chouinards are extremely competitive about the business. We focus on making high-quality products, standing behind that product for the usable life of it. We compete with every other company in our space, aggressively. I don’t think we have lost that instinct.”

The two trusts that now own all of Patagonia are called the Patagonia Purpose Trust, which holds just 2-percent of all outstanding stock but all of the voting shares and which is tasked with maintaining the company’s core values and ensuring its continued success, and the Holdfast Collective, a nonprofit trust with a stated aim of “…fighting the environmental crisis and defending nature.”

Under the new agreement, the majority of the company’s annual profits (typically in the $100 million range) will be directed to the Holdfast Collective.

This decision comes at a critical inflection point for modern brands. Skepticism of corporations and their millionaire and billionaire owners and executives is at an all time high, and consumers are demanding even greater transparency into how the brands they interact with and patronize behave. Bold claims and greenwashed advertising campaigns promising a commitment to making the world a better place just aren’t enough anymore. Consumers want to see the receipts.

Patagonia, for its part, could never be accused of greenwashing, a derisive term for covering up polluting activities with the superficial appearance of eco-friendliness. It has always been a brand driven by ideals and quick to back up its brand promise with action.

89-percent of Gen Y and Gen Z say they would switch to a brand if it was strongly associated with a ‘good cause.’

The company was an early adopter of organic cotton products, one of the first major corporations in the U.S. to offer on-site child care for its employees, and even famously discouraged overconsumption in a Black Friday ad called “Don’t Buy This Jacket.” For more than a decade, the company has also given away 1-percent of its sales to environmental causes.

The second major story touching on these issues recently was about a strongly worded rebuke published by BlackRock, the world’s largest asset manager, with a portfolio worth $10 trillion. In recent years, BlackRock has made significant investments in companies based on their ESG profile. ESG stands for environmental, social, and corporate governance and describes a framework for making those topics a priority for corporations.

BlackRock was accused of pursuing ESG goals to the detriment of its shareholders, for whom it had a fiduciary duty to protect. In its lengthy response, the asset manager explained that considering social causes wasn’t harming its investors. On the contrary, failure to do so likely would, in their view. They wrote: “We believe investors and companies that take a forward-looking position with respect to climate risk and its implications for the energy transition will generate better long-term financial outcomes.”

Furthermore, a study by Morningstar found that BlackRock was far from alone in coming to that conclusion. The research group reported that pension funds (which are characteristically conservtive in their investment strategies) had an average support rate of 80-percent for “…shareholders’ proposals that encourage companies to consider environmental, social and governance issues as well as their bottom lines.”

Choose Your Cause… But Choose Wisely

Branding is a key driver for these changes in corporate attitudes. Studies have shown intangible assets, like brand equity, are comprising a rising share of the value of enterprises across industries. Given the concurrent trend of consumers loudly demanding more action from brands to address pressing ESG issues of the day, it’s not surprising that more and more companies are reconsidering their stance.

Consumers are demanding greater transparency into how the brands they interact with behave.

For instance, a now widely cited study of Gen Y and Gen Z Americans revealed that 89-percent say they would switch from one brand to another if, all other things being equal (e.g. cost and quality), one brand was strongly associated with a “good cause.” Similarly, employees report using that calculus when choosing between two potential companies to work for and opt for the option with a stronger ESG brand by a wide majority.

That said, consumers are quick to doubt the motives of companies claiming altruistic goals. It’s vital that whatever tack is taken, it’s authentic to the brand’s core values and customer base. Pepsi learned that the hard way with its disastrous “Live for Now” campaign in 2017, which waded clumsily into controversies around race and policing in America. The reaction from consumers was swift and merciless. They immediately saw that Pepsi didn’t have a genuine connection to the issue and was merely hoping to piggyback on the attention it was receiving.

But, the bottom line is that investing in ESG initiatives, promoting branded outreach around major issues affecting your target market, and being a ‘good corporate citizen’ is more than just doing the right thing for its own sake. It’s simply smart marketing that positions an organization to outperform less adaptive and forward-thinking competitors.

Is your brand positioned to succeed with effective and authentic cause marketing? Find out how Hanlon can help.