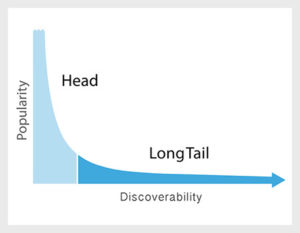 The “long tail” is a much talked about statistical concept describing the shape of certain types of distribution graphs. In a normal distribution (also called a “bell curve”) the bulk of people or things (or whatever it is you are measuring) fall in the center of the graph.

For example, if you were graphically representing IQ scores most people would fall in the middle of the curve, with relatively few people with very high or very low scores at the beginning and end. In a long tail distribution, the largest groups are at the beginning of the graph, and their less common counterparts trail off into the distance.

Imagine we are plotting soft drink preferences. Cola would dominate the front of the chart, as it’s far and away the most popular soda choice (five of the top ten best-selling soft drinks are colas, including the top three).

But there are hundreds and hundreds of other types of soft drinks (the Galcos Soda Pop Stop in Los Angeles stocks over 500). Cola is the “head” of the chart, and all the niche products would make up the “long tail.”

Economies of scale, the cost advantages gained from producing things in big numbers, have for years encouraged businesses to focus on the head and eschew the long tail. But, things may be changing. New technologies like rapid manufacturing and personalized marketing are enabling companies of all sizes to offer highly customized products and services– and the feature is becoming a key brand differentiator.

Coca-Cola introduced its groundbreaking Freestyle fountain in 2009, which serves up over 150 flavors. Now the brand can deliever everyone their favorite drink, no matter how uncommon it is. What’s more, these machines are also giving the company a whole new world of metrics to analyze.

Jennifer Mann, VP-general manager of Coke Freestyle told the audience at the “Advertising Age Data Conference” that information from the fountains had opened their eyes to markets the company was underserving: “Before Freestyle, Caffeine-Free Diet Coke was available in less than 1% of our dispensers in the U.S. Now with Freestyle it’s available in every dispenser, and it’s become a top-five brand in the afternoon daypart. So there was a huge unmet demand we were able to fill.”

She also mentioned the opportunity for chain-wide customization. Brands like Firehouse Subs have taken the capabilities of the Freestyle fountain a step further, creating their own exclusive, co-branded blends.

Nike first started offering individualized sneakers in 1999 with its NIKEiD program. The initial launch featured just one style to configure, the Air Force One, but offered 31 different customizable parts including the base, overlay, accent, lining, stitching, outsole, and laces.

Today the platform offers dozens of styles for men, women, and children, including sports cleats, skateboard shoes, and even customizable versions of their marquee endorsed brands like LeBron James and Kevin Durant’s signature kicks.

Since then, several of their competitors have offered similar services, including Mi Adidas and Your Reebok. Vans has long offered customization options for its shoes, but has more recently begun offering the feature for hats and bags as well.

Better for Customers… and Brands

Business consultant Stan Davis first proposed the concept of mass customization in his 1997 book “Future Perfect.” He predicted that manufacturing technologies would eventually be able to meet individual customer needs at close to the efficiency of mass production.

The idea was seductive, but out of reach at the time. Sure, businesses would love to be able to individualized their products, but it would drive up costs greatly. Luxury goods have long touted their customizability, but a bespoke suit requires many hours of skilled labor, which is why it costs ten times as much as one off the rack.

Today, rapid manufacturing technologies like 3D printing, as well as software solutions like “configurators” (co-design systems like the choice boards on many automakers “build a car” web platforms), have ushered in a new era in mass customization.

For example, Microsoft delighted fans when it announced Xbox Design Lab last summer, which lets gamers create the Xbox controller of their dreams, with over a billion color combinations and their names inscribed on the device.

It all adds up to companies that are more responsive to customer needs, brands than can differentiate themselves by catering to individual preferences, and it elevates shopping to an interactive experience. It also means less overproduction as products are manufactured only moments after they are ordered and sold.

And it all ties in nicely with the rapid pace of trends today. As management consultants at Bain & Company put it:

“With the proliferation of social media and online publishing, styles and trends now change faster than ever. Customization helps companies gain insights from customized designs and fine-tune products to stay one step ahead of the competition.”

Consumers expect their favorite brands to continually innovate. They want a more engaging shopping experience and goods tailored to their tastes. Mass customization is a growing space for companies to prove they are committed to providing their customers exactly the product they want.