Thought Leaders Get There First

Apple, the most valuable brand on the planet by a significant margin, is almost finished construction of its new headquarters. Apple Park, a ring-shaped, eco-friendly mothership, took five years and five billion dollars to build.

But, interestingly, a detail from the many articles covering the project as the ribbon-cutting ceremony approaches had nothing to do with its polished glass architecture or collaboration encouraging design. Instead, a round design of another kind captured the internet’s attention: a pizza box 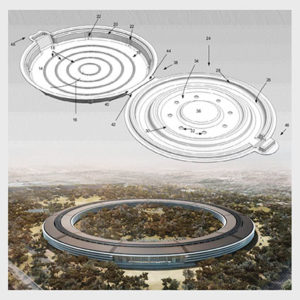 In classic Apple fashion, every detail of the site has been deeply thought out, right down to the cafeteria’s food containers. The vented takeaway box is said to keep pizza hot without letting it get soggy thanks to some clever engineering.

No doubt, it’s a darn fine pizza box, but the real story here is less about takeout supplies and more about being in the enviable position of being a thought leader.

Surely, someone at Facebook or Amazon’s corporate cafeteria is looking at their own stock of perfectly functional containers and wondering why Apple gets all the glowing headlines. But, when your brand is known for being smarter, sleeker, and just simply better than the rest it applies to absolutely everything you do– right down to the paper goods.

When analyzing consumer sentiment we often talk about ‘top-of-mind’ awareness, which asks which brand comes immediately to mind when prompted with a given category or industry. Thought leadership is owning the top-of-mind awareness for the specific category of expertise. It’s being the go-to authority in your field.

By just about everyone’s estimation Apple is a thought leader brand. They tackle harder problems, come up with more innovative solutions, and generally have more expertise than their competitors in a range of areas. Google and Samsung are no slouches themselves, and yet despite their best efforts they haven’t been able to steal the crown from Apple.

When one’s competitors are merely a click away and comparison shopping is the norm, owning a brand differentiator like that is invaluable, and not just from a customer-centric perspective. A 2016 survey by The Economist Group found that:

Everyone wants their problems handled by the best in the business. If you came down with a rare medical issue would you rather be treated by a kid fresh out of medical school or the doctor who wrote the book on your condition?

In addition to generating business opportunities, thought leaders also gain many other advantages such as attracting top talent and building up their stock of earned media from loyal followers.

Leading From the Front

The question then becomes, how exactly does one gain thought leadership status? You do it by proving your knowledge and experience day in and day out. You provide practical, useful solutions and help spread them to others. You serve as an inspiration and a resource to your audience. You do the hard work of mining insights that others have missed.

Perhaps most consequentially, you take chances others won’t. All revolutionary ideas are scary and can invite criticism. Fred Smith, the founder of FedEx came up with the idea for guaranteed overnight delivery in business school and was told: “The concept is interesting and well-formed, but in order to earn better than a ‘C’, the idea must be feasible.”

When faced with that kind of countervailing opinion, most people might second guess their initial instincts. But, leaders dare to take the chances that put them ahead of the pack. And when their bets pay off, they pay off big. Being the first to realize the potential of a new opportunity is valuable in its own right, but the corollary benefits of being recognized as a thought leader compounds the effect.

Thought leaders see further than others and reshape the world’s idea of what is possible. Not only do they reap the benefits of tapping a new market first, but they earn the right to position themselves as the leaders, experts, and influencers that they are.

The term gets thrown around alot these days, and often it seems, people think it’s a position that is easy to come by. But, true thought leadership is the product of a long-term commitment to strategic risk-taking and producing real-world results. Not everyone has the fortitude or foresight to get there, which is what makes being a leader such a rare and prized distinction.