Typography Is the Visual Influencer You Probably Aren’t Thinking About

Typography is the art and science of arranging letters and words visually. Sounds simple enough, right? As with so much of design, however, all the hard work that goes into successful typography is invisible to the end user. As adman and graphic designer Herb Lubalin said:

“When a good ad is set right, no one notices the letters*—they’re too busy reading the words.”

The job of a typographer is to organize a piece of text so its information can be easily recognized and digested. That includes selecting effective typefaces and choosing the optimal sizes and spacing to use them in. Typographers also make choices like formatting, font style (e.g. italic, bold, condensed, etc) and color.

Each of these formatting options provides different benefits to a piece of text. For instance: Bolded and colored text are used for emphasis, italics help designate special terms and titles, and bulleted lists help organize chunks of information.

Artful arrangement subtly converts a garbled mass of information into a distinct and orderly composition. Though type choice speaks quietly, even implicitly, it communicates much. It indicates how formal the text is, the tone of the content, and more: “A typeface can create emotion (happy or sad?), enhance a theme (past or present?), spark interest (shout or whisper?), add personality (silly or serious?) and even convey trust…”

It’s no surprise, then, that branding is highly dependent on quality typography. So are all the different kinds of marketing communication. 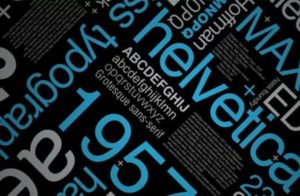 Would you invest your money in a bank whose logo was written in a funny, light-hearted typeface like Comic Sans? Neither would most people. Banks are sober institutions, and thus we expect their identities to represent that seriousness.

On the other hand: Would you be excited about trying a soft drink whose label was written in somber, chiseled-stone lettering that looked more like it belonged on a gravestone? Nope—because you have years worth of internalized associations telling you that food should remind you of life, not death. Typography influences how we think about everything we see, do, and buy. And yet most people never learn anything about it.

From Gutenberg to Steve Jobs

When Johannes Gutenberg invented moveable type in the 15th century, his printing press was rather limited in its typographical choices. Each letter was individually cast in lead, and every page that was to be printed had to be hand set letter by letter. Only master craftsmen had the skill and tools to create printed type, and they didn’t enjoy the near-infinite variety and flexibility of today’s digital designers.

Apple founder Steve Jobs is given some of the credit for the popularization of typography in modern times. Jobs, who’d taken a class in sign painting in his youth, was a lover of calligraphy, and as such demanded that the original Macintosh computer feature an array of beautifully designed typefaces. This was a first in the world of computers, which, in their early days, were limited to primitive, pixelated, built-in system alphabets.

“We know that one of the quickest trending topics hashtag-wise on Instagram is the idea of typography—things like #graphicdesign, #typography [and] #thedailytype.”

(Jobs is also responsible for confusing a key bit of typographical lingo. The Mac operating system incorrectly referred to typefaces as “fonts.” Technically speaking, fonts are specific variants of a typeface: “Helvetica” is a typeface, while “12 point Helvetica Bold” is a font. After 30 years of people doing typography on their Macs, though, the terms have become so intermingled that they are practically interchangeable at this point.)

The digital revolution democratized typography, putting powerful design tools in the hands of virtually anyone with a home computer. Changes that once took hours and days to make now take seconds, freeing designers to experiment and play with typography in new ways.

The advent of social media networks continues to push people’s love of creative lettering even further. Cris Rivera, director at Miller Lite, told AdWeek: “We know that one of the quickest trending topics hashtag-wise on Instagram is the idea of typography—things like #graphicdesign, #typography [and] #thedailytype.”

The Rules Aren’t Set In Stone

Legibility is generally improved by the use of serifs, the small lines attached to the end of a stroke in a letter or symbol (e.g., the horizontal lines at the base and top of a capital “I” in a serifed typeface like Times New Roman).

Famed graphic designer David Carson was noted for audacious and pioneering use of typography in experimental ways that abandoned pretty much all generally accepted practices. He used upside-down letters, type canted sideways, overlapping fonts, broken words, nonsensical characters, and basically anything he felt fit the text to create typography that bordered on pure works of art, yet somehow managed to still be functional.

He was famous for saying: “Don’t mistake legibility for communication.” His message was that legibility is merely a contrivance, a means to an end—not the end itself. Carson was keenly aware of how readers were becoming bored with common typography methods. He knew that to reignite their engagement, sometimes it was necessary to upend their expectations.

His lessons are more important now than ever. In today’s media-saturated world, understanding the power and appeal of typography can be what separates top brands from also-rans. Step one is learning the rules; step two is learning when to break them. Do it right, and you can achieve something that’s greater than the sum of its parts.