Valentines Day is not Just for Couples Anymore

Don’t have a big date lined up for Valentine’s Day? Don’t feel too bad, you’re far from alone.

In 1976, only 37.4% of American adults were single. That number has steadily climbed since then, and in 2014 singles outnumbered married people for the first time.

But, somehow Valentine’s Day, a holiday all about love and coupling is bigger than ever. In 2016, American’s spent an all time high of $19.7 billion according to the National Retail Foundation. That’s even more than the $15 billion that was spent during this month’s other big event, the Super Bowl. 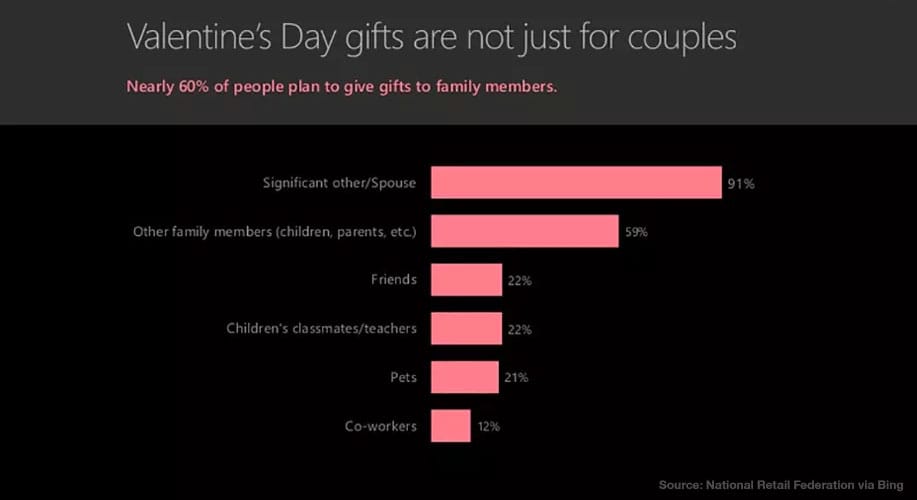 A Day For Everyone

How is it that in a country where fewer and fewer people are in relationships everyone is gaga for a day all about being in love?

Well, it would appear that the day’s meaning has expanded somewhat over the years. Instead of just doting on their significant others, it’s becoming very common to also give gifts to friends, family, classmates and teachers, co-workers– even pets!

And if you think gift givers aren’t as generous with fido as they are with their bipedal companions, think again. Nearly one in five people gave a Valentine’s gift to their pet last year, racking up $681 million in bedazzled collars and memory foam dog beds.

Valentine’s day has become a remarkably important day on the retail calendar. After years of growth it’s now the fourth largest spending event of the year (after Christmas, Back to School, and Mother’s Day).

Shopping for the occasion builds in the first two weeks of February, hitting its peak in the week leading up to February 14. 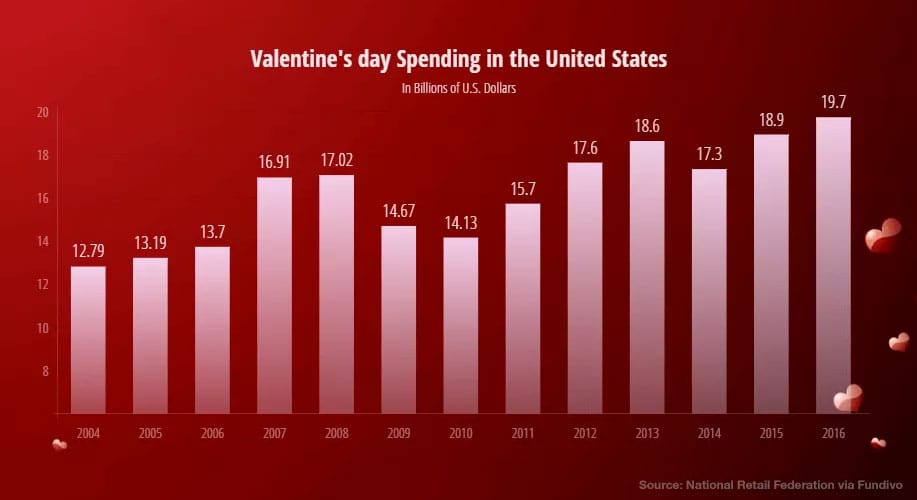 BUT LOVE IS STILL IN THE AIR

For some industries, however, Valentine’s Day is still very much about romance. Of the nearly $20 billion spent last year, $4.5 billion went towards jewlery.

People don’t often by diamonds for friends and coworkers so it’s safe to assume most of that spend came from couples. In fact, over 14 million marriage proposals happen on Valentine’s Day. That’s a lot of engagement rings.

Other industries that commonly have a big day include hospitality and travel, florists, fine dining, and confectioners.

RECOGNIZING THE PEOPLE YOU CARE ABOUT

So what can your brand do to be apart of Valentine’s Day? For one, it’s a great opportunity to express your appreciation for your customer base.

So much of the year is devoted to courting new customers. Valentine’s is the perfect day to run promotions that benefit existing customers.

Common option include buy-one-get one offers, free gifts, and discounts. But, something as simple as creating a curated gift guide to help shoppers find the perfect gift for their friends and loved ones is also appreciated.

Whatever you do, make sure to take advantage of a day that has growing significance.