Why Everybody’s Talking About Voice As A Platform 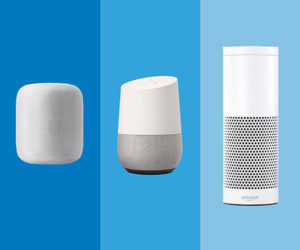 Facebook is building chatbots, Google and Amazon are churning out talking speakers by the millions (and Apple plans to get in on the action with its HomePod), hearables (smart earbuds) is a growing market, and just about every smartphone now comes with its own digital assistant baked right in.

Whether you are speaking to Alexa, Siri, Cortana, or one of their digital rivals, chances are you are already on speaking terms with a voice-based application.

A recent BI Intelligence report indicated that 9 million U.S. households have an Alexa-capable device. A study by KPCB, a Silicon Valley VC, found that two thirds of U.S. smartphone users employed a voice assistance in 2015. Google reported recently that a fifth of all searches it receives are spoken.

Everyone is suddenly in the mood to talk.

The appeal of voice interaction is the natural fluency we all have with it. Keyboards, mice, and even touchscreen gestures are all highly abstract ways to use our computers. By contrast, speaking to communicate with other intelligent beings is the default way of doing things.

To be sure, voice as a platform hasn’t matured yet. Anyone who’s gotten an incoherent response back after asking their smartphone a simple question can tell you that this generation of digital assistants aren’t always that intelligent. But, new technologies invariably have bugs to be worked out.

Ultimately, adding voice interactions will open up computing to millions of people who can’t or don’t like to use keyboards, mice, and touch gestures. People with vision impairments have been relying on screen readers and text-to-speech software for decades. With the addition of nearly perfected voice recognition and artificially intelligent agents, the technologies that have enabled them are evolving rapidly and other groups are seeing the advantages of using voice to navigate and operate our networks and systems. 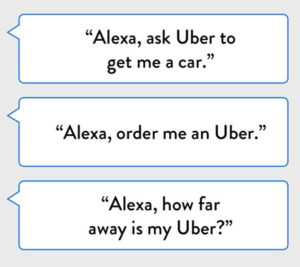 In just a few short years the platform has grown considerably. Several major brands are jumping at the opportunity to add voice to their omnichannel strategies.

Alexa, which is available on Amazon’s Echo line of smart speakers, operates a “skills store” (it’s version of an app store; Google calls their voice apps “actions”) for third-party developers to build new functions for their voice-enabled products. For example, users can download skills created by Starbucks and Domino’s to order their favorite snack just by asking.

They can also tell Alexa to call an Uber, play their Spotify favorites, ask Campbell’s for a recipe, check their Capital One bank balance, or see if the BMW in their garage is gassed up. These skills are a way for brands to achieve several goals. They get early experience with the voice platform to inform later campaigns, but they also get to engage with their customers in a space that isn’t yet overcrowded.

Not only will their voice literally be heard above the fray, but voice itself is seen as a powerfully engaging medium that has its own advantages. It’s something that is part of their daily lives, and unlike clicking and typing, has an immersive and instinctual quality to it.

According to Amazon’s own figures, Echo owners spent 10% more on Amazon in the six months after purchasing the device. That bump in sales is partly due to the novelty appeal of a new and exciting platform, but some of it has to be credited to the ease and usefulness of shopping by voice.

Campbell’s, for its part, is concerned with staying relevant and available to consumers wherever they are. A VP for the company asked the Financial Times rhetorically:

“Cookbooks have been replaced by tablets. What will tablets be replaced by?”

Some brands are looking on with caution, noticing that the brand most commonly recommended by Alexa is AmazonBasics, the home brand of the world’s biggest online retailer. Others are going in their own direction. Walmart’s acquisition of ecommerce site Jet.com was their latest challenge to Amazon’s dominance in the space.

There seems to be about a dozen revolutions happening at any one time these days. The channel options for your omnichannel strategies just keep growing. It’s anyone’s guess as to which is going to have its moment next, but voice as platform is building up momentum.

Brands have always wanted a creative conversation with their customers. This is might be the best opportunity yet.