Why Print Ads With An ‘Aha Moment’ Go Viral

KFC won the internet for a day back in April when a set of print ads for the Hong Kong market went viral. The ads promoting Hot & Spicy fried chicken featured images of rockets and race cars blowing hot, flaming exhaust. Upon closer inspection, however, those billows of fire appear to be coated in 11 herbs and spices.

It was funny and surprising and blew up on social media. These type of successes remind us that the same principles that underpin great print ads translate perfectly to a new online medium and a new generation of audiences.

These ads all give the viewer just enough information that they have to use their brains to fill in the gaps. They take a journey and experience a satisfying payoff for their efforts.

That hasn’t made the job any easier, though. It requires a lot of creative juice to take a complicated, abstract idea, like “this chicken is powerfully hot,” and distill it into just images and words — oh, and while you’re at it, be novel, entertaining, and mobile display friendly.

Yet, even when not digitized, the humble print ad still has a few tricks other formats can’t match. There is a reason why Google and Facebook, the kings of online advertising, still buy traditional print ads to promote their brands.

Print is an inherently slower medium, where readers examine everything in greater detail and with a more critical eye. It’s not just the format that’s different, the audience’s mindset is more receptive to engage with the content. Evocative print ads can be so powerful, they can even lead people to think they’ve tried a product that doesn’t exist! 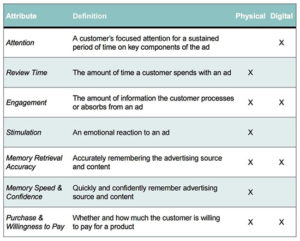 A neuromarketing study found that not only did people who viewed print ads with vivid imagery of a fictitious popcorn brand later report having actually tried the fake product, but they had stronger and more favorable opinions about it than those who viewed less visually appealing ads.

Another reason why print ads persist is that a very deep-seated place in the human brain still favors physical objects over the virtual. Paper can’t match the speed, flexibility, or capability of digital tech, but the act of actually holding an image in your hand and feeling the glossy paper it’s indelibly printed on makes it more real in your brain.

Eye-tracking and brainscan studies prove that old-fashioned direct-mail ads are still easier to understand and recall than digital alternatives. As newer generations of digital natives grow up in a world where paper is scarce, that might change some. For now, however, paper still encourages a stronger connection to content.

Old Tricks for a New Medium

Despite the differences between digital and physical media, classic art direction and copywriting techniques are still ingrained in the best print ads. The name of the game is to intrigue the viewer and delight them with a clever or moving concept.

Beautiful typography, cunning optical illusions, reinterpretations of familiar images, bold statements, and emotionally resonant concepts stop us in our tracks and possibly even change the way we see the world. 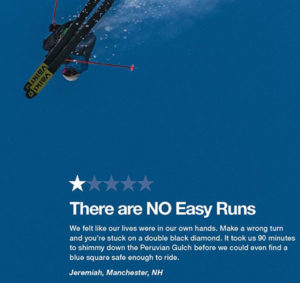 Another way brands force people to take notice is by letting down their guard and appealing to their audiences on a very relatable level. Just about every company has realized by now that their exposure to their customers was drastically increased by the internet. In an environment where you can’t hide your flaws, you have to own then. Several brands successfully leveraged the print format to do just that in recent months.

Burger King steered into the skid with “Burning Stores,” a series of made-to-go-viral ads showing actual BK locations on fire with the headline “Flame grilled since 1954.” Millennials got the joke and responded positively to the self deprecating and radically transparent vibe.

Snowbird Ski resort also made viral waves with a print ad that at first blush looked like many others. It matched a skier tearing up the powder on a pristine mountain with a testimonial. Nothing too unusual there. Strangely, though, it was a one-star review complaining that the mountain was too difficult for all but the most advanced skier. The message was clear: beginners look elsewhere, this slope is for serious thrill-seekers.

These ads all give the viewer just enough information that they have to use their brains to fill in the gaps for that “aha” moment. They take a journey, experience a satisfying payoff for their efforts, and feel appropriately clever for having solved the puzzle.

Conceptual advertising is always a creative and strategic risk. But, the best advertising is inherently risky. Concrete and straightforward is the right approach in many cases, but when you force the audience to engage more you make a stronger impression — the kind that builds brands and spreads like wildfire online and off.